Sometime around 1999-2000, I met David Kuijt through Fanaticus and was soon introduced to David Schlanger, Jack Sheriff and other Washington, DC-area gamers who shared an interest in ancient and medieval wargaming with the De Bellis Antiquitatis rules.  It wasn’t long before we had formed a group – the Washington Area DBA Gamers, or WADBAG for short, complete with a logo (at right) and a banner hand-painted by David Kuijt bearing the slogan (“Jace Sex” or “Roll Sixes”) that accompanied us on any significant club outing. 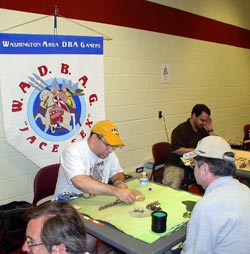 In its heyday, WADBAG was a prolific champion and promoter of DBA, organizing countless tournaments, historical scenarios and introductory games at HMGS-East Conventions, publishing the “Unofficial Guide to DBA,” serving as host club for the annual De Bellis Vasingtonium DBA tournament, promoting the V2.2+ house amendments to DBA, and creating original material for the DBA gaming community.

By name and example, we helped inspire the formation of other DBA groups around the U.S., such as NADBAG (Nebraska-Area), GLADBAG (Great Lakes-Area) and FADBAG (Florida Association), etc. and eventually ended up competing with many of these clubs in the Team Cup tournaments held at HMGS-East Conventions.

The ranks of WADBAG were constantly in flux, as members came and left the DC metropolitan area and/or as their gaming interests evolved.  As former webmaster for the WADBAG website, below is my “semi-official” list of all known WADBAGers.

WADBAG effectively disbanded in the Summer of 2016, as the remaining principals reorganized as the Washington Grand Company, and redirected their time and attention to development of the Triumph set of ancient and medieval wargaming rules.

* Led Kloskey was one of the original WADBAGers until his relocation from the DC-area to West Point.  Led was the originator of the famous “Kloskey Maneuver”…also known as “Pulling a Kloskey”…which is what happens when you maneuver your 12 element DBA army so that each element requires a pip to move (i.e. you have no groups of two or more elements).  You might think that would put you at a competitive disadvantage…but not for Led.  Mark Pozniak was another early WADBAG principal who left Northern Virginia to put down roots in rural New York state.  Despite not being from the DC-area, Mike Stelzer was dubbed an Honorary Member after filling vacancies on two WADBAG team cup rosters and contributing to their competition victories!