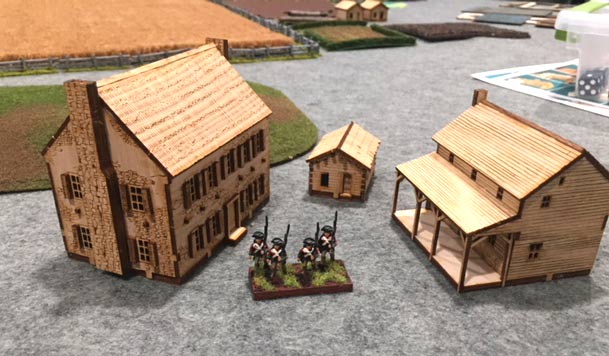 In a previous review of Early American Buildings by TRE Games Inc. in MDF kit form, I noted my hope that they would add a smaller version of their highly detailed 28mm Country House to their 15mm range; and I’m pleased to say it’s now available.   This prompted me to put in an order, and in addition to the Country House, I picked up three of their Small Cabins to use as outbuildings to the big house, along with an Early American Hotel, which I think will also work well as a road-side tavern or cross-roads general store.

I started construction with the Small Cabins, which looked to be the simplest kit of the three.

Basically four walls, a door, and two roof sections that all slot together quickly with some white or carpenters glue.  In addition to six roof beams, all the extras pieces are nifty cutouts that you can use for other scratch-building projects or to build lumber piles, etc. 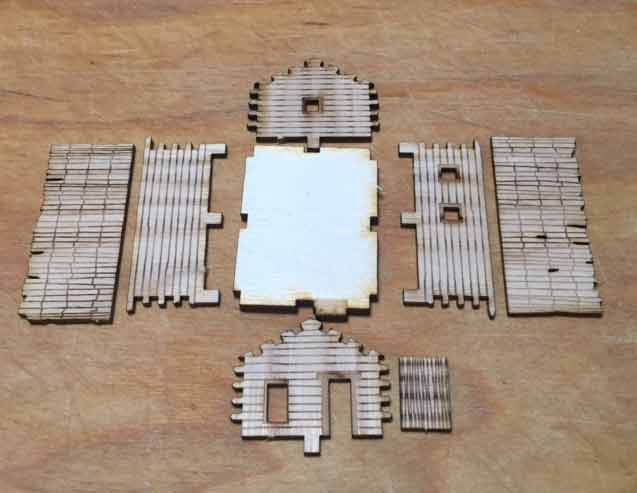 One innovation to the basic kit that I highly endorse was the addition of the roof beams, which provide a very stable surface on which to glue the roof sections.  This helped eliminate the problem of roof warping I had with some previous kits.

Next up was the Early American Hotel, which was also a fairly simple kit, with the most fiddly part being the supports for the front porch roof.   I had worked up a head of steam after assembling three small cabins, and forgot to take pictures of the Hotel while under construction…but here is the finished product:

And now to the star of the show…the 15mm Country House.

Compared to the other kits, it has a lot of pieces, including 54 small shutters. 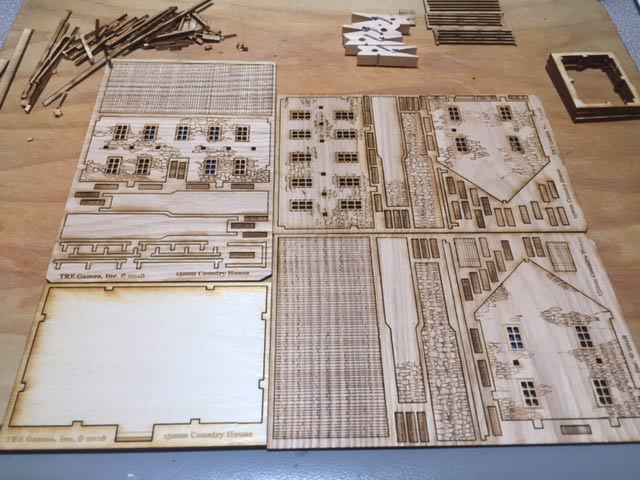 But the basic construction technique is the same…four walls slot into the floor, then assemble and add your door frame and door, chimneys, floor joists, and shutters to the basic box shape.

They suggest adding the shutters after assembly.  I thought it might be easier to add them before assembly, but found the wet glue caused some warping that made it more difficult to assemble the basic cube.  It took a while to get everything lined up exactly right and I had to use makeshift clamps to straighten things out and keep them in in place while the glue dried.  But the end result was worth it.

Last shot shows the three buildings side by side with a stand of 15mm Essex AWI Continentals for scale reference.

Love these buildings.  They’ll work great for American conflicts from the the French and Indian War through the Civil War and later for rural settings.  I can also see this Country House situated somewhere in the French countryside circa WWII.

Can’t wait to see what TRE Games Inc. comes up with next.  Add a two level front porch to that Country House, and you’ve got a Plantation House that would do Patriot Benjamin Martin proud.